Chat with us, powered by LiveChat
Home / News / WSL Sydney kicks off at one of the 5 best surf beaches near ICMS

For the first time ever, the WSL Sydney will be held at one of our local world-famous surf beaches right here on the Northern Beaches. As apart of the famous world championship tour the World Surf League (WSL) stops at the beautiful beach of Narrabeen, and local residents along with ICMS staff and students are excited to witness surf competition history. From the 16th to the 26th of April the high-performance lefts of Narrabeen beach will host the WSL Ripcurl Narrabeen classic. New South Wales Deputy Premier John Barilaro is thrilled, saying “Narrabeen is one of Australia’s most iconic surfing beaches and we want to make the most of the benefits that (the WSL Sydney) provides.”

The Northern Beaches of Sydney has a rich surfing culture and history going all the way back to when Duke Kahanamoku (the Hawaiian pioneer of surfing) first introduced this new sport to the shocked onlookers at Freshwater Beach. Since then, many of Sydney’s beaches including Freshwater and Manly have become protected world surfing reserves which recognises the historical, cultural, and environmental values of these famous surfing beaches. The Northern Beaches has many terrific breaks and beaches which has bought in the WSL Sydney with Manly being voted by TripAdvisor as the best beach in Australia two years in a row.*

The WSL Sydney will attract many of the worlds best talent in surfing with surfing celebrities such as John John Florence, Gabriel Medina, Kelly Slater and Owen Wright tipped to make an appearance. In the women’s division the famous Australian surfer Tyler Wright will be trying to further her lead at the WSL Sydney.

ICMS overlooks the pristine Manly Beach (just a short ride away from the WSL Sydney in Narrabeen) and has actively pursued and cultivated a good relationship with Northern Beaches surfers and surf clubs. ICMS sponsors all the Northern Beaches Surf Lifesaving Clubs – including the WSL Sydney stop of Narrabeen. Many students choose ICMS because they want to pursue an education in a place where they can both study and surf together. A popular destination for locals and international students alike, ICMS has easy access to over 9 beaches just a short walk from campus.

Being so close to the beach, ICMS students are naturally big surfing fans with student Juliette Wilson saying “I’ll definitely be there, the opportunity to watch some of the best surfing talents so close to my home and college is a real privilege and I am stoked to witness it.”

In fact, the ICMS Surf Team won the 2019 University games in the Gold Coast, taking out the gold for surfing with notable surfing alumni including Tom Bennet and Riley Cadman.

In celebration of the WSL coming to Sydney’s Northern Beaches we asked ICMS students to pick their top 5 surfing beaches close to campus.

The top spot in this list has to go to the distinctive beach of Manly where ICMS is located. With access to great bars, restaurants, shopping, sports teams and fun activities along with a plethora of public transport options such as the iconic Manly Ferry, Manly Beach is not a one hit wonder. However, the waves and surf in Manly is what takes this beach to the next level. Having hosted many surf contests before such as the Vissla Surf Pro and the Hurley Australian Open, Manly has a wide range of surf that on a given day can satisfy both short-boarders and long boarders alike. 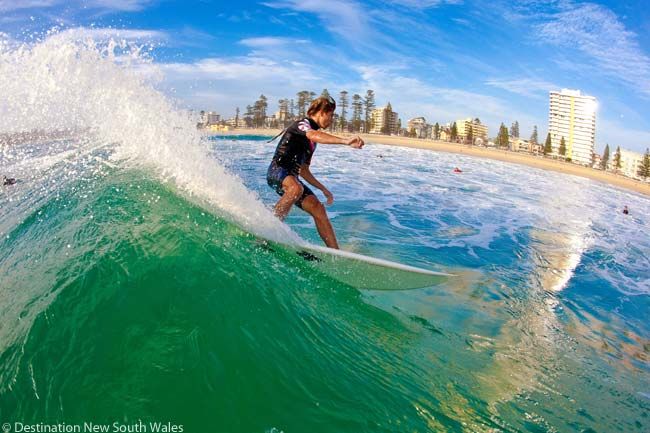 Freshwater Beach is another iconic surf beach near the ICMS campus. Wedged between two headlands Freshwater has some great right handers on the point. Located next to a quaint village with many nice cafes and restaurants, Freshwater or also commonly known as ‘Freshie’ by locals has some of the nicest sand dunes backing onto a lush grassy park, perfect for picnics and dates. Curl Curl Beach is another popular spot for ICMS beach goers. It is a large beach with many different surf breaks ranging from the south of the beach right up to the beautiful vegetated headland towards the north. Backing onto Curl Curl lagoon, the longshore drift creates a range of surf conditions ranging from rolling chilled waves to more hectic barrels on a good day. Narrabeen Beach understandably has to be on this list. Hosting the WSL Sydney is evidence enough that this beach has some of the best surf in the world with some great left handers towards the north of the beach. 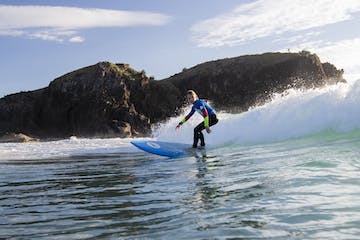